The Ministry of Finance and Economic Development released the 2020 Budget Strategy Paper in October. The conclusion of the current fiscal year, FY19/20 marks the end of the first half of the eleventh National Development Plan (“NDP 11”).

For some background, NDP 11 is the first medium-term plan towards the implementation of Botswana’s second vision -Vision 2036. The Plan will run from the 1st of April 2017 to the 31st of March 2023.

Government has utilised this moment to review the trajectory of the fiscus against NDP11 and take measures to re-align the second half of NDP11 to budget expectations.

NDP 11: REVIEW OF FIRST HALF PERFORMANCE

The main costrationalisation efforts are a moratorium on new parastatals, refraining from building new offices and rationalisation of the civil service. This will include freezing on manpower positions in FY21 and encouragement of Ministries and Agencies to rationalise their existing establishments. The reduced development expenditure budget will be utilised on high return projects. 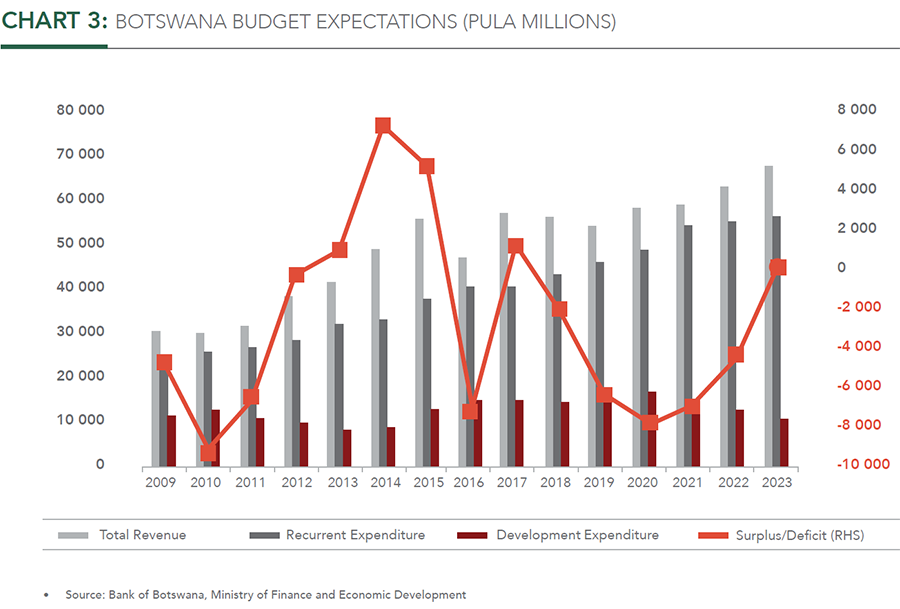 Government has acknowledged that something had to be done to arrest further deterioration of the fiscus and has embarked on a cost minimisation process in order to achieve a balanced Budget by the financial year 2022/2023.

The successful implementation of the 2020/2021 Budget and future Budgets will rest on the ability of Government to successfully implement highreturn projects within time and budget, limit cost leakage and support business in order to boost Customs & Excise revenue.