In local currency terms, the MSCI Country World Index rose 68bps in Q2, recovering a bit of the 84bps decline in Q1. Earnings estimates for developed markets were stable throughout the quarter as Emerging Markets sold off significantly (down 7.8%). The US Dollar continued to strengthen in June, leading DXY US Dollar Index up 2.5%on a year-to-date basis. On the other hand,the Euro fell more than 5% in Q2, ending the quarter at the 1.17 level against the US Dollar. The Japanese Yen also weakened against the US dollar in Q2 ending June at111 against the US Dollar – a yearly low.

A big trend for global markets is the renewed divergence of US and Eurozone monetary policy: the Federal Reserve is tightening policy to avert any inflation risks while the European Central Bank has shifted in a dovish direction. The spread between10-year US and German yields has reached its widest level in almost 30 years, and the Euro has been pressured.

Oil prices rocketed to a four-year high in June, and hit the USD 80 per barrel mark after US President, Trump, withdrew from the Iran nuclear agreement. The rise reflects continuing strong demand – with China and India’s growth engines needing increasing fuel and supply-side constraints.

That deceleration in global growth seems to be ending. Cyclical indicators are consistent with a turning point in momentum. So we expect global GDP growth to accelerate in H2, having slowed in H1. The current consensus forecast is 3.3% global GDP growth this year and 3.1% next. Momentum should be evenly balanced between developed and emerging economies:consensus forecast growth this year of 2.4%in developed markets and 4.9% in emerging markets. 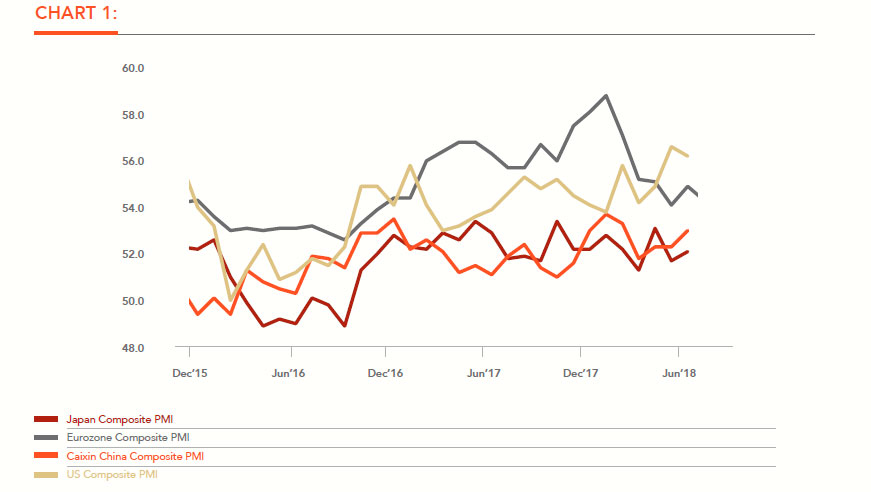 Notably, escalating trade tensions pose risks to global growth and inflation. Uncertainty over trade could dent investment as US monetary tightening puts financial pressure on emerging economies. The direct effects of the tariffs imposed by the US on its trading partners, and their retaliations, scale to reasonably small units of global GDP.Even if one assumes a further escalation in coming months, these direct effects are unlikely to be meaningful enough to generate a significant cut in growth forecast.But indirect effects could be significant.

The recovery in business investment from its slowdown in 2015-16 is still tentative,especially in emerging markets. Uncertainty over trading relationships, or the viability of specific investments in supply chains,could have a chilling effect on business spending globally. At present, it is genuinely unclear what the effect would be. Previous spikes in uncertainty this decade have been accompanied by meaningful shocks to financial conditions or sectors, which we judge to have been the more dominant driver of slower investment.

What this means is that the near-term prospect for the global economy looks promising, with continued above-trend growth likely over the coming year. But risks are building. They stem from isolated US policy action. Fiscal expansion is pushing US policy rate expectations ever higher relative to the rest of the world, risking financial tightening in some emerging markets. And escalating trade tensions pose downside risks to business investment.