The FABI returned 1.3% for the quarter. The Government bond yield curve steepened as the short end fell on account of the Bank of Botswana’s (BoB) ratecut. The yield on BW008, BW013 and BW012 declined by 90bps, 63bps and 4bps respectively. The BW007 and BW011 remained flat, whilst the BW014 and BW015rose by 35bps and 2bps respectively. 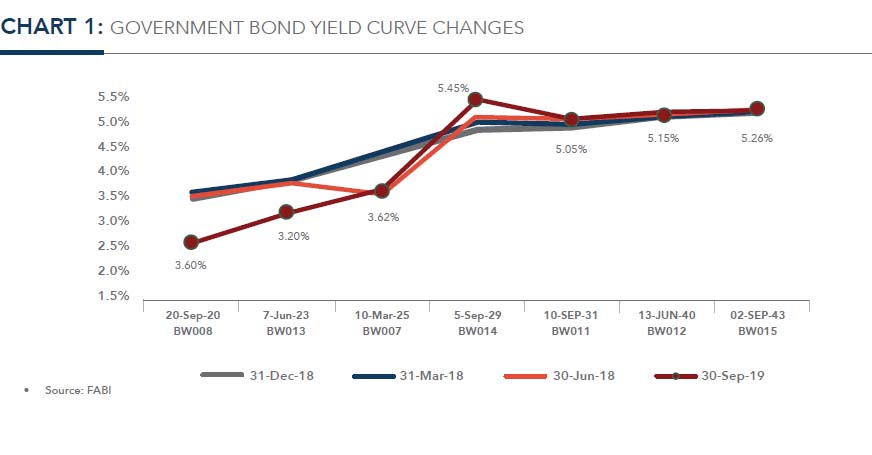 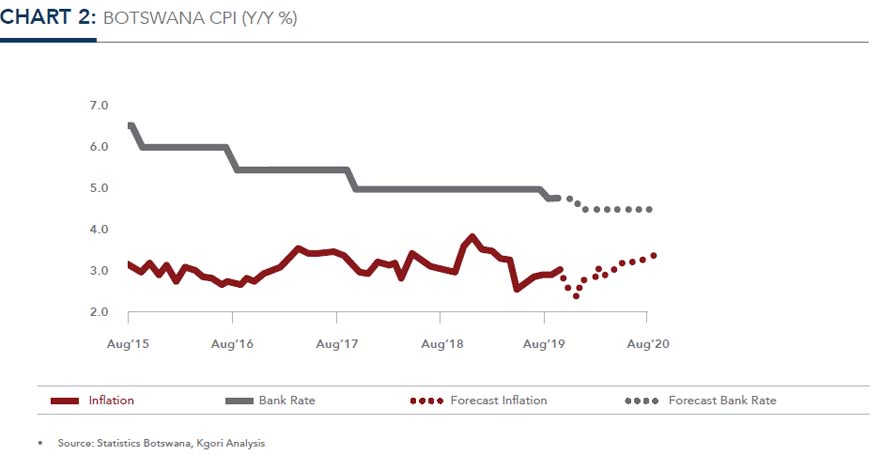 Going forward, we expect inflation to remain below the mid-point of BoB’s 3%-6% objective range with risks balanced. We forecast inflation to reach 3.0% by December 2019. This is 0.2% lower than our previous forecast, due to lower than expected food inflation. The main upside risk for our inflation forecasts relates to increases in administered prices such as fuel, water and electricity as well as resurgent food inflation driven by dry weather conditions.

Global fuel prices have surged by 20% year-to-date in 2019, which increases the prospects of more fuel increments following the precipitous fall of global prices in December last year. The main risk to the downside emanates from continued lacklustre domestic demand.

The Monetary Policy Committee (MPC) met once during the quarter on the 29th of August.The MPC decided to reduce its benchmark interest rate by 25bps to 4.75%. BoB decided to reduce rates to stimulate the domestic economy “with inflation low and stable and inflation expectations well anchored.” BoB expects inflation to revert within its 3%-6%objective range in Q1 2020. BoB stated that its outlook is subject to upside risks emanating from administered prices and downside risk emanating from restrained global economic activity, technological progress and productivity improvement.

GDP statistics released indicated that the economy grew 3.9% in Q2 2019 on a 12-month rolling basis, down from the4.9% growth recorded in Q2 2018. The deceleration in growth was due to slow down in Mining, Trade, Hotels & Restaurants and Manufacturing.We forecast another year of moderate growth for the Botswana economy in 2019. We reduced our GDP forecast by1.0% to 3.5% due to sluggish mining activity.Diamond activity is expected to decelerate on account of a more challenging environment in China, resulting in higher than normal polished diamond inventories in the midstream.

Q2 2019 Mining Production statistics were released by Statistics Botswana. Overall,mining production contracted 8.6% y/y. The main detractor was diamond production,which declined by 8.4% y/y due to cautiousness on account of weaker trading conditions. Trade statistics indicated a deficit of P3.2bn in June. Exports decreased by53.2% m/m (P3.0bn) driven by a 56.2% m/m(P2.9bn) drop in diamond exports and imports increased by 24.6% m/m (P1.2bn) due to aP870mn increase in diamond imports. On a12-month rolling basis, the trade balance was marginally negative at a P48mn deficit.

The BoB released its August MPC Report which painted a gloomy picture of both the global and domestic economy. Globally,trade tensions are expected to weigh on growth, and locally, diamond activity is likely to fall. Diamond activity is negatively affected by uncertainty surrounding the proliferation of synthetic diamonds and weak downstream sentiment related to macroeconomic and geopolitical factors.

We continue to monitor with a keen eye all developments,performances and trends.