The September 2020 Government Bond and Treasury Bill Auction saw Government securities worth P2 147mn on offer, an increase of P301mn from the May 2020 auction. The net issuance at the auction was NIL, however, due to the P2 147mn BW008 maturing on the same day coupled with Government having exhausted its P15bn bond programme during its May 2020 auction. The bid-to-cover ratio was 1.4, slightly lower than the 1.5 achieved in May 2020. The most demanded instrument was the BW014, which received P1 138mn bids with a bid-to-cover ratio of 1.2. Government was selective with regards to final allocation, preferring to issue more BW014 than initially offered due to the higher demand for the bond.

Inflation continued to trend below the Bank of Botswana’s (BoB) 3%-6% objective range. September 2020 inflation came in at 1.8%. Inflation has been restrained by deflationary Transport inflation (-3.9%) and low Miscellaneous inflation (0.7%). 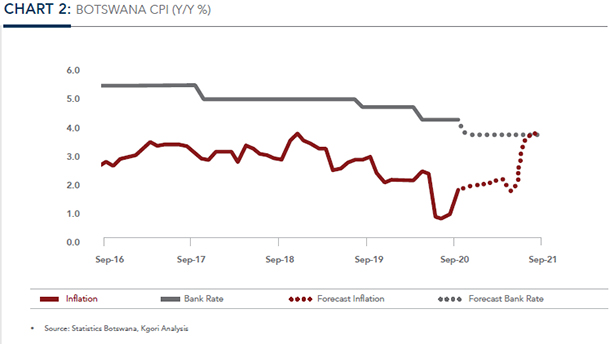 The BoB Monetary Policy Committee (MPC) met once during the quarter on the 20th of August 2020 and maintained the Bank Rate at 4.25%.

In reaching its decision, the MPC noted the short term shock to the domestic economy is occurring against a potentially supportive medium-term environment, including accommodative monetary conditions, improvements in the provision of utilities, reforms to further improve the business environment, concerted efforts by the Government to mitigate the impact of COVID-19 and the prospective economic stimulus package. The BoB thus did not see the need to cut rates further.