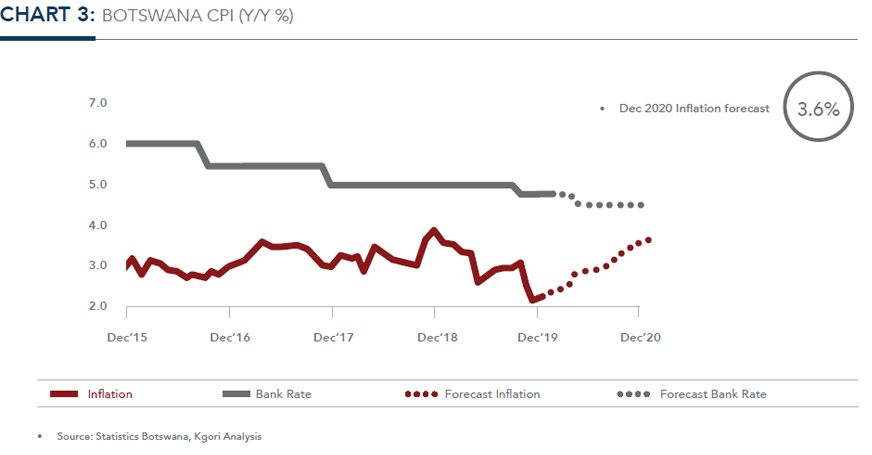 Looking ahead, we expect inflation to remain below the mid-point of the Bank of Botswana’s 3%- 6% objective range with risks balanced. The main upside risk relates to increases in administered prices such as fuel, water and electricity as well as resurgent food inflation driven by dry weather conditions. The main risk to the downside emanates from continued lacklustre domestic demand.

The Monetary Policy Committee (MPC)   during the quarter on 31 October and5 December. The MPC left its benchmark interest rate unchanged at 4.75% due to the current Monetary Policy stance being consistent with maintaining inflation within its 3%-6% objective range. The Central Bank expects inflation to remain subdued in the medium term and revert to within its3%-6% objective range in Q2 2020. The Central Bank’s positive inflation outlook in the medium term is driven by subdued domestic demand pressures and modest increases in foreign prices.

We expect the Bank to proceed with another rate cut within the first half of 2020 in order support economic growth. The August 2019rate cut by the BoB was effected in order to support growth now that the Bank feels expectations of stable and low inflation are well anchored. The Gross Domestic Product(GDP) growth is expected to decelerate in2019 which increases the prospect of another 25bps cut.

For 2020, we forecast another year of moderate growth for the Botswana economy. We expect the economy to expand by 3.5% for the fiscal year 2019and 4.0% in 2020 due to stabilisation in the diamond market.

Q3 2019 Mining Production statistics were released by Statistics Botswana and highlight that the overall mining production grew-0.4% y/y. The main detractor was diamond production which declined by 0.7% y/y due to cautiousness on account of weaker trading conditions.

The Ministry of Finance, in conjunction with the Bank of Botswana, conducted a review of the Pula basket in November 2018. They maintained the current Pula basket weights at 45% ZAR and 55% SDR and implemented a 1.51% downward rate of crawl per annum effective 1 January, 2020. The rate of crawl was adjusted from an upward rate of 0.30%(appreciation) for 2019. The change in crawl suggests expectations for Botswana inflation to be moderately higher than that of our trading partners. We expect this to have little impact on the Pula outlook as the domestic currency will remain mostly linked to South African Rand and US Dollar movements. The Rand remains at risk to global investor sentiment swings.

We continue to monitor with a keen eye all developments, performances and trends.