Inflation remained lackluster and continued trending below the lower bound of the BoB’s 3.0%-6.0% objective range. March inflation came in at 2.2% and remains tepid due to a low housing(1.5%) and transport inflation (0.8%). The lack of administered price increases in the first quarter of 2020 also held back inflation.Inflation, excluding administered prices was 2.7% in March, 0.5%higher than headline inflation. 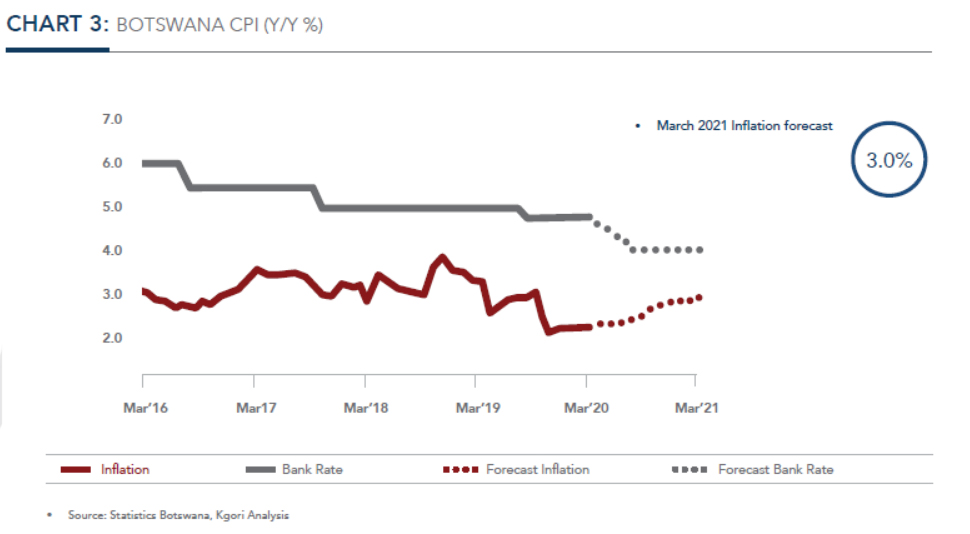 The Monetary Policy Committee (MPC) met once during the quarter on 26 February 2020.The MPC left its benchmark interest rate unchanged at 4.75% despite inflation trending below its 3.0%-6.0% objective range. The MPC believes inflation will revert to within its objective range in 2Q20.

Credit growth recorded in January 2020 was8.6% year-on-year (y/y) driven by household credit which grew by 14.4%. Business credit growth continued to contract but at a lower rate, registering a 3.3% contraction compared to a 4.9% contraction in December 2019.

Gross Domestic Product (GDP) statistics released indicated that the economy grew3.0% in 2019, down from the 4.5% growth recorded in 2018. The deceleration in growth was due to the slowdown in Mining,which declined from 7.6% in 2018 to -3.9%in 2019. The 2019 fourth quarter mining production statistics revealed that overall mining production contracted by 7.9% in2019. Unstable commodity prices resulted in all the minerals registering negative yearon-year growth rates. The main detractor was diamond production which declined by7.0% y/y on account of initiatives taken in the industry of reducing bulky production in order to align output to the trading conditions in the diamond market. Furthermore, trade statistics indicated a surplus of P0.3bn in January2020. On a last 12-month rolling (LTM)basis, the trade balance stood at a deficit of P14.6bn. The main driver of the trade deficit is a reduction in the diamond trade which declined by 24.3% on an LTM basis toP31.4bn in January.

There were several unprecedented policy interventions and responses announced to theCOVID-19 health crisis. These interventions include providing the fiscal and monetary stimulus to support the economy. The initial intervention put forth was the declaration of a State of Emergency and Extreme Social Distancing to stifle the spread of COVID-19by the President of the Republic of Botswana,H.E. Dr. Mokgweetsi E. K. Masisi. The minimum duration of the State of Emergency(SoE) was 28 days, beginning on 2 April 2020.The SoE was later extended to 6 months,following endorsement by Parliament on 9April 2020.

The Central Bank, Bank of Botswana (BoB),then announced capital relief and additional liquidity measures to enable commercial banks to address liquidity challenges during the current market environment and to continue to support economic activity. The minimum capital adequacy requirement was reduced to 12.5% from 15.0%; the cost of borrowing from the Credit Facility was reduced to the Bank Rate from Bank Rate plus600 bps; repo facilities that were available only on an overnight basis will be offered against eligible securities with outstanding maturities of up to 92 days; and the collateral pool will be extended to include corporate bonds listed and traded on the Botswana Stock Exchange (BSE). These policy measures were effective from 1 April 2020 except forthe collateral pool, whose details will be  communicated later.

The Ministry of Finance and Economic Development (MFED) also released guidelines for a package of fiscal interventions to mitigate the potential negative impact of the COVID-19 pandemic on the economy of Botswana. MFED was guided by Presidential Directive to seed the Fund by mobilising P2.0bn through transfers from Special Funds and appropriation from the Consolidated Fund. Moreover, additional funding will be mobilised from the private sector and development finance institutions.The interventions are targeted on sectors,firms and households that have suffered the greatest adverse impact from the restrictions imposed to suppress the spread of the virus.