The Domestic equity market remained subdued for the quarter, declining 2.3% and 0.1% on a price and total return basis respectively. Market activity was characterised by large block trades in NAP, CA Sales and Letshego.

Prime Time released interim results,reporting an 18% increase in rental income compared to the previous period. This performance was driven by the inclusion of Centro Kabulonga mall in Lusaka, as well as improved performance of the Pilane Crossing centre. The company has a healthy development pipeline and is expected to complete 3 projects within the 2018calendar year. NAP also reported interim results, showing that rental income for the period grew 15.7% despite no changes to the property portfolio. Escalations and a reduction in vacancies drove performance. Distributable income increased by 9.3% to12.25t per linked unit.

Choppies’ interim results showed a welcome turnaround in the South African unit, which showed a profit for the period. Group profitability increased 21.8%. Expansion plans continue; 33 new retail sites were added, increasing total retail space by 17%and adding Mozambique and Namibia into the Choppies regional footprint. Another turnaround story was Furnmart, reporting a 164% growth in PAT for the interim period. The closure of the loss making Zambian operation boosted performance.Management’s focus has been on turning around non-performing stores, as well as steady expansion in South Africa.

Wilderness Holding’s financial year end showed a 14% reduction in operating profit primarily due to higher depreciation costs;this was a result of increased investment in new camps and refurbishment of existing locations. This investment is expected to yield positive occupancy and room rate results once complete. On the other hand, Chobe Holdings’ year end operating profit increased 13.8% as occupancies improved and a positive contribution from the aircraft maintenance business. During the year,the company acquired a lodge and three farms on the Northern border of the Central Kalahari Game Reserve.

BTCL results for the year showed an 8% decline in PAT as administrative expenses grew and the effective tax rate increased.Expense growth was driven by a once-off provision for future staff incentive pay, as well as the payment of the last years’ incentive pay. This double hit is not expected to recur.

On the corporate actions front, LLR appointed Chikuni Shenjere-Mutsiwa as its CEO, effective May 2018. Barclays Bank of Botswana announced that it will change its name to Absa Bank Botswana following the Barclays PLC and Barclays Africa sell-down.

The Q1 2018 GDP figures point to a 6.5%increase in household final consumption despite the continued pressure in formal sector employment. These consumption growth numbers paint a positive picture of underlying household demand. The potential review of liquor trading hours, as well as the excise duty charged on locally produced beer, is potentially positive for Sechaba. Despite the positive developments in the consumer sector, we still, however, have our reservations on the sector. 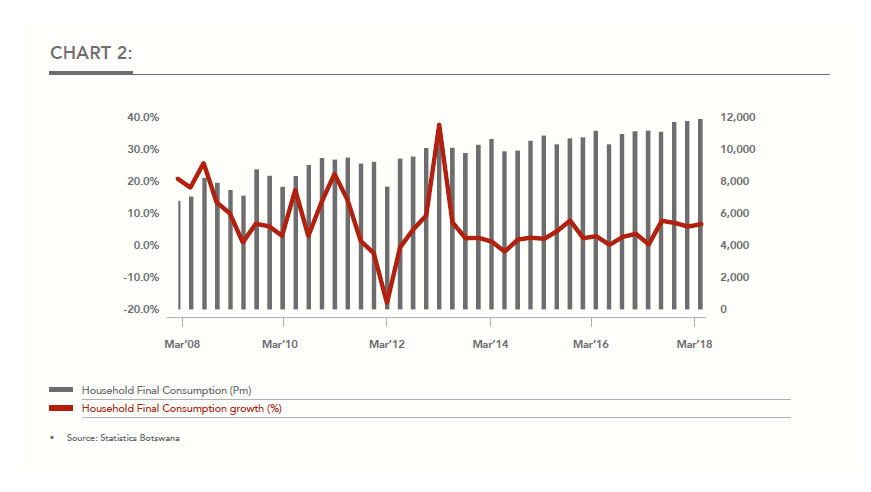 We are cautiously optimistic going into the second half of the year. Government spending is expected to ramp up going into the election year, with a number of construction and maintenance tenders already gazetted. The business-friendly position of the new political dispensation is also encouraging. This may be the positive catalyst the non-mining economy needs to grow meaningfully going forward. The Bank of Botswana (BoB) Business Expectations Survey also points to improved sentiment around current and future business conditions.

We are of the view that we are in the tail end of the downturn in the domestic equity market. Sentiment remains weak, with retail investor liquidations continuing. That said, fundamentals are making a come back in terms of driving prices and valuations on a number of counters have become compelling. With strong selling pressure and muted demand on certain counters, this remains a buyers’ market.