The FABI returned 0.5% for the quarter as interest income more than compensated for capital losses. Both Government and Corporate bonds registered positive returns for the quarter, returning 0.4% and 1.3% respectively.

The pressure on Government bonds remains as yields continued to rise across the curve with the exception of BOTSGB0325 (BW007, 4-Year bond) which experienced a 15bps drop in yield. The upward shift in the Government yield curve is expected to continue as Government bond supply will increase in order to fund its ERTP. 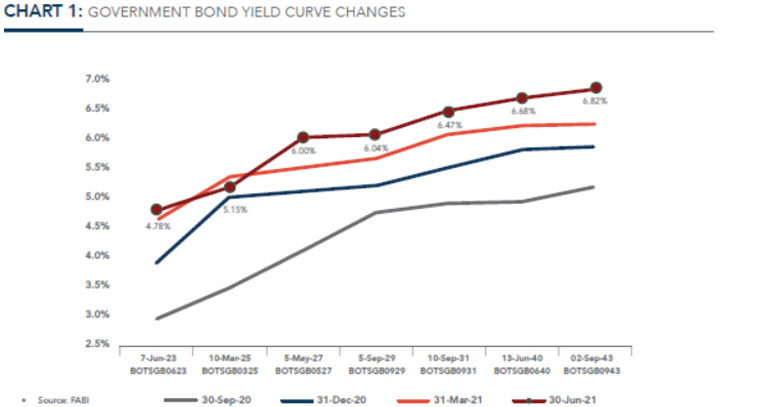 There was one auction held during the quarter where P2.0bn of bonds and T-Bills were offered. There was decent demand with P2.3bn of bids received, however, in a similar manner to Q1 2021’s auctions, it was under allotted with an allotment ratio (allotment divided by securities on offer) of 46.0%. The bulk of the allotment was at the short end of the curve where P1.0bn (96.2% of total allotment) T-Bills were issued. On the long end of the curve, two out of the three bonds on offer were not allotted; the BOTSGB0623 (BW013, 2-Year bond) and the BOTSGB0931 (BW011, 10-Year bond).

The question still remains how the Government plans to fund its projected deficits. Even with the news that the IMF has approved a $250mn (~P2.8bn) loan to support Botswana’s economic recovery, there is an increased likelihood that projects under its ERTP may be delayed due to insufficient funding.

Transport inflation’s increase is due to the increase in global oil prices which have risen by 45% thus far in 2021. Moreover, housing inflation has soared as a result of the normalisation in BHC rentals to market levels (3-4x increase in some instances) and the ~13% increase in water tariffs. Food inflation has been supported by the recent increase in VAT, coupled with regional and global supply chain disruptions.

We expect inflation to accelerate further premised on continued supply-push inflation and base effects arising from the Transport basket. The main upside risks to our outlook remains higher than expected Food and Transport inflation. The main downside risk remains continued lacklustre domestic demand.