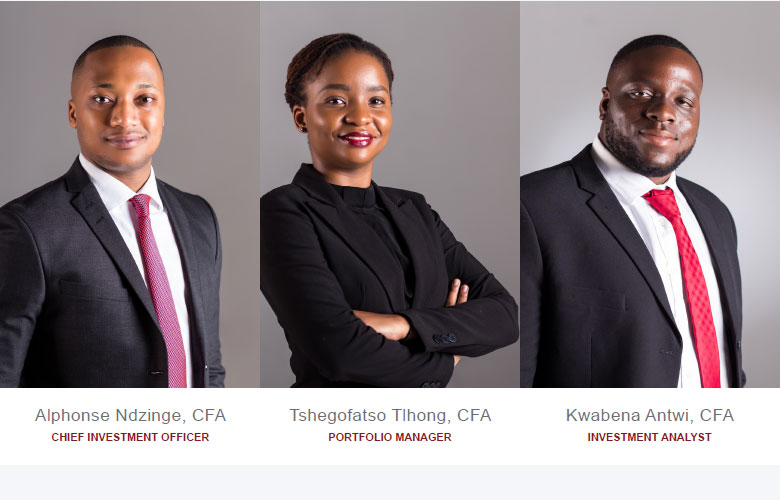 2018 marks the tenth anniversary of the Global Financial Crisis and of the start of the Great Recession. On our forecasts, we expect 2018 to be another year of stable growth for the domestic economy with a growth forecast of 4.0% y/y. This is below the Ministry of Finance and Economic Development’s forecast of 5.3%. Our growth expectation is more in line with the Bank of Botswana’s September 2017 Business Expectations survey in which businesses said they expect GDP to undershoot growth projections with GDP growth of 3.8% in 2018.

Our lower growth expectation is on account of more moderate output for Trade, Hotels & Restaurants and Mining sectors. The normalisation of growth for Trade, Hotels and Restaurants follows year-on-year growth for Q4 2016 of 13% which is unlikely to recur in 2018. We expect mining output to continue its recovery due to a resurgence in diamond activity as developed market consumers spending increases underpinned by a sustained rise in global equity markets, loose monetary policy and US tax reforms. However, our mining sector output forecast is not as optimistic as the MoFED. 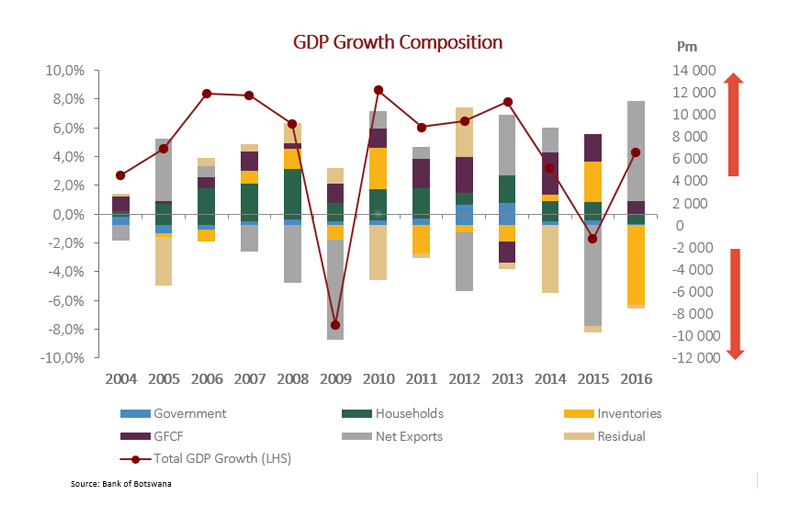 Turning to the Pula, the Ministry of Finance in conjunction with the Bank of Botswana conducted a review of the Pula basket in November 2017. They decided to maintain the Pula basket weights at 45% South African Rand and 55% SDR for 2018. The rate of crawl was adjusted from an upward rate of 0.26% (appreciation) to a downward rate of 0.30% (depreciation). The change in crawl should have little impact on the Pula outlook as the domestic unit will remain mostly linked to South African Rand and Pula movements. The Rand, despite a significant 10% overall appreciation during 2017 versus the USD, remains at risk to global investor sentiment swings.

The monetary policy loosening cycle continued in Q4 2017 with an unexpected 50bps rate cut in October 2017. To give context, the Bank Rate has gone from 15.0% in December 2008 to 5.0% in December 2017, meaning that interest on a 30 year mortgage written in 2008 has come down 10 percentage points in the last 10 years! Going forward, we expect the Central Bank to maintain its current accommodative monetary policy stance in order to support economic growth.

Loose monetary policy is not positive for banking sector profitability if it doesn’t stimulate demand, which is what we are seeing unfolding at present. Muted credit growth opportunities in the medium term will limit sector growth as household affordability ratios remain stretched. The impact of IFRS 9 is still unclear to the market but it will have a bearing on impairments, capital adequacy and, potentially, on product mix.

On the flip-side, business credit growth has started gathering steam, albeit from a low base, which is a positive indicator for future economic activity.

The latest print for business credit growth was 6.8% y/y for October 2017. According to the Bank of Botswana September 2017 Business Expectations survey, 67% of domestic-orientated businesses are optimistic about the future state of the economy for the 12 month period to December 2018 versus 42% of export-oriented business. The divergence in expectations is likely due to expected increases in Government expenditure in 2018/19 as we go into election year.

Inflation expectations are benign; we expect inflation to remain constrained to the lower bound of the Bank of Botswana’s 3%-6% objective range with risks tilted to the downside. The main upside risk relates to administered prices which may boost inflation in the medium term. As a result, the downward pressure we have seen on achievable rental escalations in the property space will persist. The proliferation of shopping malls and centres, as well as an oversupply in commercial properties will dampen growth potential within Botswana and call for creative in-country expansion. That said; these stocks have fared well in the stock market decline, providing stable dividend returns as well as preserving capital. Regional and international expansion has resulted in an increase in foreign currency earnings, making certain property counters act as Pula hedges.

Accordingly, we do not expect the Bank of Botswana to reduce rates further unless inflation continues to trend below its objective range. We do not expect this to be the case on account of administered prices, fuel pump prices in particular. Global oil prices have already continued to rise in 2018 due to expected supply reductions on account of OPEC production caps. 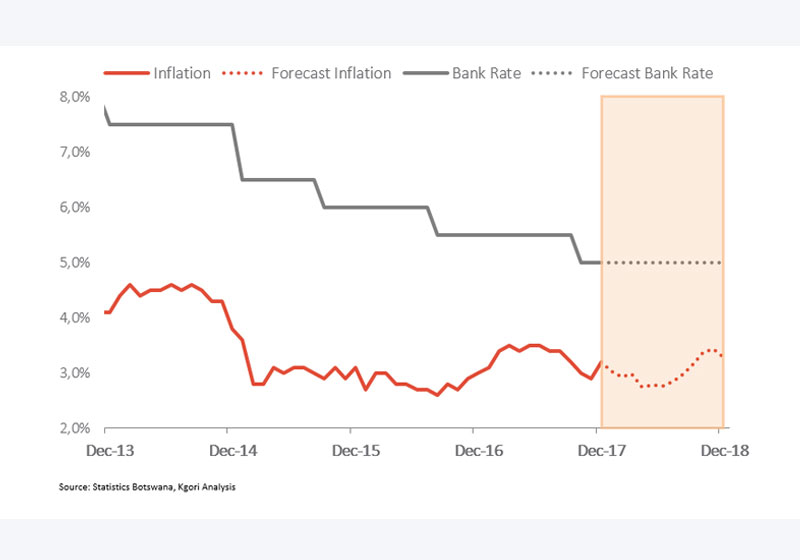 We have seen insignificant wage inflation of late and we expect this trend to continue; this is bad news for consumer retail. Though activity remains, consumers are trading down to smaller pack sizes and cheaper brands – the theme is more bang for the buck. We are also seeing delayed spend as they await promotional offerings; a practice that has put pressure on retail margins and led to imported food disinflation. Formal retail in Botswana is saturated therefore competition is fierce and geographic diversification is key.

Global economic growth is expected to persist in 2018 on the back of ongoing loose monetary policy. In the USA particularly, a tight labour market and fiscal incentives will lead to rising incomes. This bodes well for luxury tourism in Botswana seeing as the US is our largest source market, followed by Europe. Health scares in South America, coupled with security concerns in Europe, made travel to Southern Africa particularly compelling in 2016/17 and given that bookings are made 12 to 18 months in advance we expect to continue seeing the impact of this. Authentic experiences and eco-tourism are top travel trends at the moment, which is also a positive for our local tourism operators. This sector provides a welcome Pula hedge in a world where expectations are that the USD will strengthen. However, USD pricing may make Botswana packages relatively more expensive as regional competitors’ price in local currency.

Junior mining activity resuscitated in 2017, with the listing of Minergy and Tlou Energy. Due to the rise in the international coal price, major South African coal producers are exporting their coal. This has led to a shortage in the in-land market. Prices have soared and Botswana Juniors are looking to capitalise on this gap. Key risks around securing funding to bring projects to commercial production exist. We are of the view that opportunities exist and there are players that are well placed to take advantage of them.

The good news for local stock market investors is that company valuations have improved. For the first time in almost three years the price-to-earnings ratio of the Domestic Companies Index is below 15.0x, almost equalling the 20 year average of 14.0x. Although our investment team has identified some local equity shares as bizarrely overvalued, trading at levels that appear very difficult to justify, there are many opportunities that are attractively valued.

Equally important for us as valuations, is the dispersion of valuations – or the difference between richly valued and reasonably valued stocks – which is at a high point. This speaks to the high payoff for correctly identifying the winning companies and positioning for when their valuations converge with fundamentals over time. The opposite is also true, where many companies are set to disappoint investors due to their high valuations when the correspondingly high expectations that are built into their stock prices fail to materialize. This landscape presents exciting alpha opportunities for Kgori Capital as active, bottom-up investors. 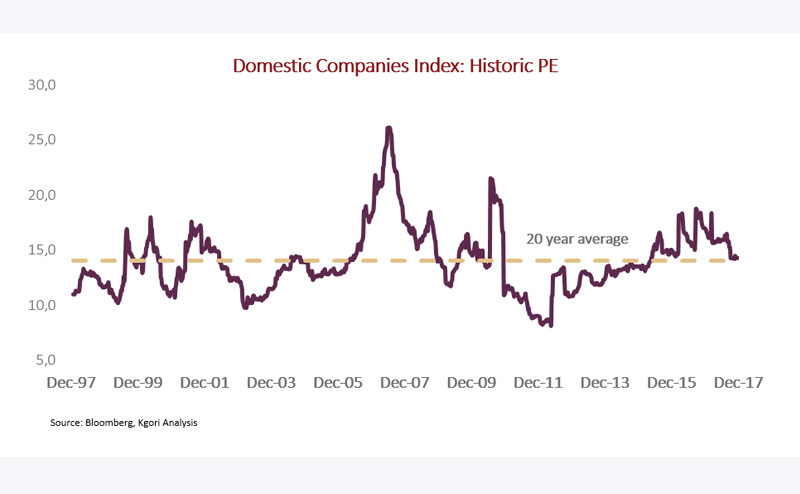 We must always mind the risks, but for now we appear to be in a relatively low risk environment locally, regionally, and globally. Locally, our over-dependence on mining; the rising polarization of incomes and household wealth; and high youth unemployment levels remain key risks for the momentum and sustainability of economic growth. Regionally, politics should dominate the front pages as speculation over a change in presidency and possible ratings downgrades for South Africa. Uncertainties over the fortunes of Zimbabwe in a post Mugabe era should also be of interest.

Globally, Europe probably presents the most risk on the political front with Brexit negotiations. The rise of separatist movements and anti-EU populists is another source of concern. China is less likely to cause global economic disruption thanks to the party leadership’s consolidation of power in 2017, strong consumption, and infrastructure spending driven by the One Belt One Road initiative.

So going into 2018, challenges abound across the different sectors of the economy. In the same vein, we are of the view that we are at the bottom of the cycle and opportunities are emerging; the trick is to find and back the right horse. As long-term investors, we can never afford to let optimism compromise our approach, but we do at least head into the New Year with the best global economic backdrop seen for several years.