There is a sustained upward trend of inflation and this remains a key variable both locally and internationally.

The road to recovery yet again remains uneven and forecast risk high.

The DCI was up 3.3% and 4.3% for the quarter on a price and total return basis, respectively.

The largest gainers for the quarter were Letshego (28.6%), FNBB (8.0%) and LLR (7.6%) on a total return basis. The biggest losers were G4S (-9.7%), Cresta (-3.7%) and BTCL (-3.4%). Consumer staples companies kicked off earnings season with the release of their interim results. For the period, Choppies more than doubled earnings per share (EPS) to 8.0t from 3.3t the previous  comparable period. Trading volumes improved, albeit at lower margins, and high foreign exchange gains bolstered performance.

Choppies is trading from a position of P334m negative equity therefore questions around this issue’s impact on future operations remain. Sefalana interim EPS was down 21.3% to 35.5t despite a 19.8% increase in revenues. Margin compression and the Group’s share of losses incurred by the Australian investment drove results lower. Sechaba full year EPS increased by 29.1% to 181.0t, driven by a pick-up in sales volumes for both operating companies. KBL’s share of profits was up 32.0% and Coca Cola Beverages share was up 27.7%.

Letshego’s full year EPS grew by 14.4% to 29.4t driven by improved overall operating profits and a reduction in the Group effective tax rate. The loan book grew by 16.9% and asset yields remained broadly in line with the previous year. The BIHL Group’s full year EPS came in 27.5% lower on account of a 45.8% increase in claims and benefits paid to P2.5bn. Earnings were supported by a 7.1% increase in premium revenue on the back of new business and an 18.7% increase in their share of Associate profits.

Banking sector performance was a mixed bag. FNBB interim EPS grew 37.8% to 17.71t as the impairment charge to the income statement declined significantly relative to the previous comparable period. A 19.0% increase in non-interest expenses, on an already high base, further boosted earnings.

Absa’s full year EPS came in at 58.98t, 69.4% higher than the previous period, as impairments were 69.8% lower than the previous year. StanChart’s negative JAWS came back into play as costs grew but revenues declined; as a result profit before tax was 24.6% lower.

EPS for the year came in 21.2% higher on account of a lower effective tax rate relative to the previous period. Access Bank’s full year EPS was 2.31t, 81.1% lower than the previous year also on account of negative JAWS. Operating costs for the Bank increased 52.0%, driven by spending as part of the Bank’s transition from BancABC to Access Bank.

On the property front, FAR’s interim earnings per linked unit (EPLU) declined by 15.4% as earnings came down by 8.4% and the number of linked units in issue increased by 4.7%. The conclusion of the RDCP acquisition of Tower Properties added P3.4bn in investment properties to their portfolio, more than doubling its size. Operating profits were down 24.2% on higher expenses but the gain on bargain purchase more than made up for it, resulting in EPS growing to 164.0t from 7.6t in the previous year.

On the corporate actions front, Cresta entered into a lease agreement for a new 62 room hotel development in Mahalapye to complement their existing 64 room Cresta Mahalapye Hotel. Construction is expected to commence in Q2 2022, for completion in June 2024. PSG Group announced that it will distribute its 47% shareholding in CA Sales (CAS) to its shareholders on a pro-rata basis as the Group restructures and unbundles its holding in CAS and other holdings.

Earnings expectations continue to trend upwards, with overall market valuation in line with historic levels albeit at a higher dividend yield Than historic levels.

The main conversation is on what the optimal exposure to local equities is as earnings expectations trend upwards in a market that is cheap relative to historic levels. The dispersion in individual company performance remains high, with few counters driving much of the index performance in the last year.

Inflation remains a key variable both internationally and locally.

Higher inflation, coupled with contractionary fiscal policy and a turn in monetary policy into a tightening cycle will erode household purchasing power.

This, in an environment of negative real wage growth and escalating unemployment is negative for business confidence in consumer-facing segments of the economy. The sustained upward trend in inflation, though negative for low-income households, is positive for the Property and Consumer Staples sectors. We expect the Consumer Staples margin expansion to continue, and inflation linked property rental escalations to

be positive for the property sector Despite the mixed bag of banking sector results, overall impairments have come down from their 2020 peaks. The sustained demand for rough diamonds and potential loss of market share by Alrosa present an opportunity for fiscal buffer rebuild and sustained positive mining GDP growth beyond the initial COVID-19 recovery upswing. Additionally, non-interest income growth is strong and with a turn in the interest rate cycle expected in the near-term.

The outlook for sector earnings is positive. Hospitality remains in the doldrums, operating well below breakeven capacity. We  have noted the uptick in advance bookings; a positive indicator that the reopening of the sector is gaining traction, albeit from a very low base. Despite the green shoots, the uncertainties facing the industry remain.

We would like to reiterate that the road to recovery remains uneven and forecast risk high. The uneven nature of the recovery and the uncertainty around the timing of fiscal support flow will keep balance sheet strength, market positioning and dividend flows at centre stage. 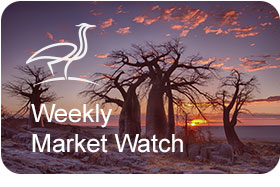